Harnessing the wisdom of crowds: AI in the collaborative workplace

Harnessing the wisdom of crowds: AI in the collaborative workplace 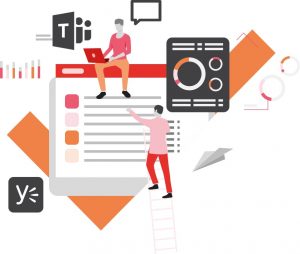 Synopsis: Enterprise social networks are now an everyday part of organisations: by migrating service management functions to these channels, businesses are able to unleash the potential of their employees while reducing the risks that accompany flatter, faster communication.

The rise of enterprise social networks is one of the key workplace stories of the last few years. IBM recently confirmed that it would be rolling out Slack among its entire global workforce, while Microsoft has relentlessly pushed Teams and Yammer as integral parts of Office 365. By March 2019 half a million organisations around the world used Teams, including 91 of the Fortune 100. Not bad for an application that was only launched in 2017.

This trend both reflects and enables changing patterns of work. Flatter hierarchies and increased remote working have created a demand for applications that enable real-time collaboration, regardless of physical location. But they also fulfil deeper social needs among workers.

In one academic study, ‘The crowd is a collaborative network’, researchers found that workers on crowd-sourcing platforms like Mechanical Turk self-organised and collaborated organically even without corporately-endorsed social networks. Despite the fact that workers were assumed to be working independently and autonomously on tasks, grassroots networks of support and advice emerged, whether it was to share information about upcoming opportunities or to answer queries relating to specific tasks. Collaboration, it seems, is an inevitable part of work: the study’s authors concluded that effective crowdworking systems need to factor this in.

When they operate well within organisations, platforms like Slack and Teams reduce much of the inefficiencies of other ways of working, such as email, conference calls or face-to face meetings. But as well as their efficiency, they also fulfil a social function for workers. They’re like virtual water-coolers for discussing specific business issues or for team-building through shared experiences. Maybe those GIFs on Teams aren’t a waste of time after all.

Some of the business issues people post about on enterprise social networks will fall under the traditional remit of service management; for example problems installing new software or working out how to log time on a new system. Social networks enable users to offer peer-to-peer solutions, whether it’s links to third-party software or by sharing ‘hacks’.

This is empowering for employees and could reduce pressure on IT helpdesks, but it’s also potentially unsettling for organisations used to top-down control. In a worst-case scenario, it could prove disruptive to core business functions. How do we reconcile the risk with the opportunity?

I believe that service management AI has a key role to play as a moderator in this collaborative future, in two key ways:

Imagine a discussion among co-workers on Teams about problems they’re having getting their microphone to work on the platform. AI could identify the issue and serve a knowledge article to the entire group that explains how to change the default mic settings. Or consider a group of users chatting about ways to compile management information. AI could chip in and direct the group to the company’s preferred reporting solution, saving the users time and reducing potential risk to the business.

In both these examples, AI is an active participant in online discussions, directing users to relevant information. And as the AI continues to learn, such interventions will become increasingly pertinent.

AI is fundamentally concerned with pattern recognition. By analysing the metadata of conversations, it can spot trends and act as an early warning system, highlighting common concerns among users, or identifying areas where users are going off-piste.

To give an example, AI might pick up on the fact that users within an organisation are looking to create distribution lists, and relay this information to the IT team who may decide to release a self-help document or arrange training. Enterprise social networks open up a rich seam of business data for organisations: AI is a vital tool for extracting that data.

The future is social

Collaboration platforms are set to become an increasingly important and effective channel for service management. Unlike traditional helpdesk channels, where issues are resolved on a one-to-one basis, enterprise social has a huge advantage in terms of reach.

By acting both as a participant in collaborative platforms, as well as an analyst, AI will perform a vital role as a moderator within these networks, meaning businesses can harness and encourage the potential of their employees while reducing the risks of misinformation.

Instead of taking people out of the equation at work, which is the doomsday scenario among AI sceptics, machine learning in collaborative systems could actually enable employees to work more effectively, more efficiently and with a far greater sense of empowerment.

“IBM Goes All In on Slack, Microsoft Teams Gets a New Boss”, CMSWire.com

To find out how AI can drive efficiencies and improve user experience in your organisation, speak